Yet more plots to ponder... and remember, we can always create a custom scenario for your particular event! 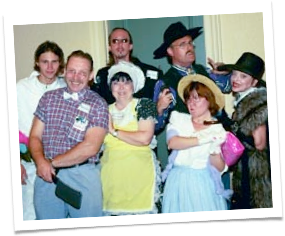 ​Check Out Time
​Welcome to the Sleep N’ Snore, a peaceful little inn nestled in the quiet hills of the country. Proprietress Minnie Barr and the inn’s staff, Manny Gerr, Kit Shennette, and Hoss Kepping are struggling to keep the inn afloat despite a recent rash of bad luck. Unfortunately things really start to heat up when Minnie’s “ex-” husband, Jack Cuzzi, makes an unexpected visit bent on blackmail! 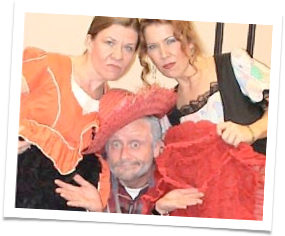 Swing Your Partner... Dosey Die!
​YEE HAH !! Not since the season finales of American Idol and Dancing with the Stars has the town of Dippentwirl, TN been so abuzz with anticipation and excitement. The International Heel & Toe Committee’s selected this syncopated little town to host it’sannual High Stepping Hoedown. Everyone’s dance card is full as a highly competitive group of hopeful hoofers take the stage to strut their stuff in this tense toe-tapping competition. But while most concentrate on whether they should promenade left or promenade right it soon becomes apparent there’s some killer competition this year! It may take two to tango but it looks like it may only take one to hustle up and electric slide into a homicide. Sheriff Albee Danged will have to stay light on his feet as he shuffles and shimmies through the conga line of clues constituting this cavorting caper! 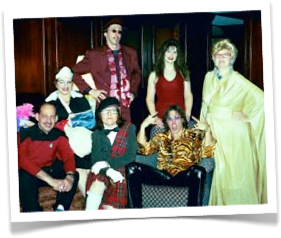 ​Murder & Magnolias
​Martha Monet, extravagantly rich southern socialite and Ginsu knife distributor, is hosting a party tonight for her twin daughters, Harmony Belle and Calliope Belle. Tonight marks the tenth anniversary of their father’s demise, and each girl will receive millions from Daddy’s trust fund tonight at the stroke of midnight. A medley of family and friends have been invited to participate in tonight’s festivities, but a pall is cast on the evening when we discover one of the twins has been murdered, a Ginsu knife embedded in her frail little back. In this murder mystery we pose the question, “Do blood-laced frocks come clean with Woolite?” 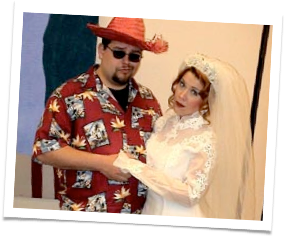 ​Death Al Dente
​The Fettuccini family welcomes you this evening to the party being given by Don Al Fredo Fettuccini to announce his daughter Mara Narra Fettuccini’s engagement to Eddie Spaghetti—one of the Don’s faithful hammers. With all the Don’s “business” associates attending the party as well as the Don’s consigliore (the family lawyer) with his guest Penne Risotto, we can be assured there won’t be any trouble - unless someone in the family is cooking up a pot of trouble that no one was expecting. 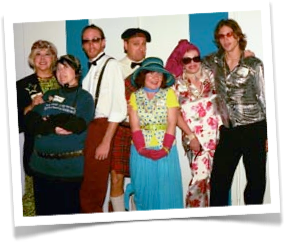 ​Scandal on the Set!
Join us on the set of “The Hot and the Hunky” - Hollywood’s latest daytime drama. The set’s buzzing with activity as the crew sets up to film some steamy scenes with star, Luce Maurels.....as soon as they can pry her out of her dressing room where she’s smooching with her newest paramour, Lucky Enlof. Although you may witness some snide dialogue and a temper tantrum or two...don’t worry, it’s all part of the artistic process! These temperamental stars will kill to get the film in the can! 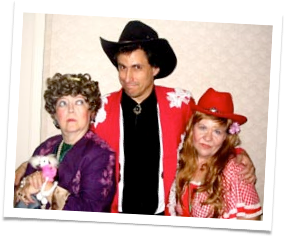 All titles and scenarios are the property of LCP Copyright 1995-2018
All rights reserved.  All stories, characters and scenarios are fictitious, and any resemblance between the characters or depictions within are completely coincidental.  Reproduction or use in any manner without express written permission from Laughing Corpse Productions is prohibited